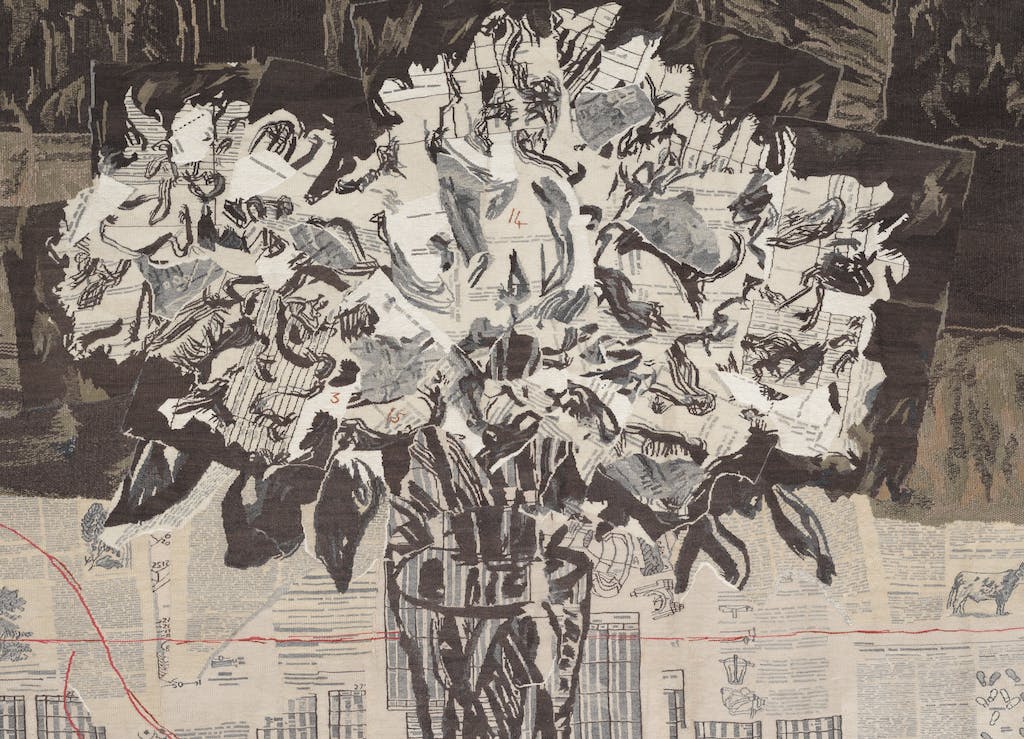 A visionary artist who experiments with drawing, animated films, performance, installation and stage direction, William Kentridge was born in 1955 in Johannesburg, South Africa, where he still lives and works. He studied politics, African studies and fine arts in Johannesburg before spending one year in Paris in the early 1980s, where he attended the Jacques Lecoq theatre school with a focus on mime. His expressionist oeuvre challenges the traditional approach of history as a linear narrative and proposes instead a multi-layered collage patched together from a variety of vantage points.

Paper and prints play an essential role for Kentridge, who studied etching at the Johannesburg Art Foundation and later spent two years teaching printmaking in the same institution. His images begin with ink, pencil or chalk on white paper or printed pages torn from an encyclopaedia or a newspaper that later translate into etchings, serigraphs, linocuts and lithographs. Adding another layer to his rich array of media, Kentridge has been producing tapestries in collaboration with Stephens Tapestry Studio in Johannesburg for more than 20 years.

Kentridge’s animation films are composed as a succession of photographs showing charcoal drawings which are erased and altered on the same sheet of paper, each image being adjusted again and again until the end of the scene. Time is at the core of this see-through production process – the repetition of drawing and erasing going back and forth – reflecting the artist’s nonlinear approach to history.

His enticing imagery blurs boundaries between genres to explore the recent history of a country afflicted by apartheid. His 1987 play 'Sophiatown', produced in collaboration with the Junction Avenue Theatre Company, depicts the expulsion of the historical Black community from a Johannesburg neighbourhood in 1955. His performative work 'The Head and the Load', that premiered at Tate Modern in London in 2018, focuses on the role of Africa during the First World War. Since the late 1990s, Kentridge’s protean approach translates on stage into multi-layered collages that include video, animation, shadow play and puppets. Amongst other productions, he has staged Shostakovich’s 'The Nose' (2010) and Berg’s 'Lulu' (2015) and 'Wozzeck' (2019) at the Metropolitan Opera in New York.

William Kentridge’s work has recently been exhibited in major solo shows at the Deichtorhallen, Hamburg (2020–21); Kunstmuseum Basel (2019); Museo Nacional Centro de Arte Reina Sofía, Madrid (2017); Whitechapel Gallery, London (2016); Martin-Gropius-Bau, Berlin (2016); and Ullens Center for Contemporary Art, Beijing (2015), amongst others. In 2016 he unveiled the 550-meter-long frieze 'Triumphs and Laments' that depicts a procession of mythological and historical characters along the bank of the Tiber River in Rome. He has participated in several iterations of the Venice Biennale, in 1993, 1999, 2005 and 2015, as well as Documenta in 1997, 2002 and 2012.

Why Should I Hesitate: Putting Drawings To Work, Deichtorhallen, Hamburg, Germany

A Poem That Is Not Our Own, Kunstmuseum Basel, Basel, Switzerland

NO IT IS!, Martin-Gropius-Bau, Berlin, Germany

I am not me, the horse is not mine, Tate Modern, London, England